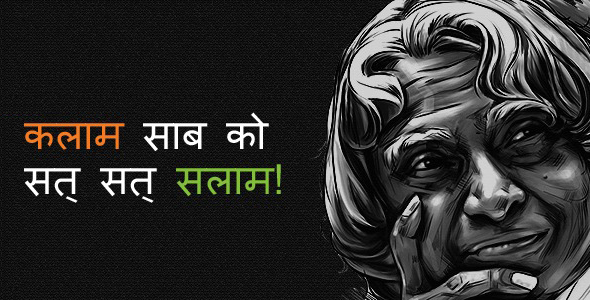 Born on 15th October 1931 at Rameswaram in Tamil Nadu, Dr. Avul Pakir Jainulabdeen Abdul Kalam, specialized in Aeronautical Engineering from Madras Institute of Technology. Dr. Kalam made significant contribution as Project Director to develop India’s first indigenous Satellite Launch Vehicle (SLV-III) which successfully injected the Rohini satellite in the near earth orbit in July 1980 and made India an exclusive member of Space Club. He was responsible for the evolution of ISRO’s launch vehicle programme, particularly the PSLV configuration. After working for two decades in ISRO and mastering launch vehicle technologies, Dr. Kalam took up the responsibility of developing Indigenous Guided Missiles at Defence Research and Development Organisation as the Chief Executive of Integrated Guided Missile Development Programme (IGMDP). He was responsible for the development and operationalisation of AGNI and PRITHVI Missiles and for building indigenous capability in critical technologies through networking of multiple institutions. He was the Scientific Adviser to Defence Minister and Secretary, Department of Defence Research & Development from July 1992 to December 1999. During this period he led to the weaponisation of strategic missile systems and the Pokhran-II nuclear tests in collaboration with Department of Atomic Energy, which made India a nuclear weapon State. He also gave thrust to self-reliance in defence systems by progressing multiple development tasks and mission projects such as Light Combat Aircraft.

“Dream is not the thing you see in sleep but is that thing that doesn’t let you sleep.”

“Thinking should become your capital asset, no matter whatever ups and downs you come across in your life.”

“Behind the parents stands the school, and behind the teacher the home.”

“It is Very Easy to Defeat Someone, But it is Very Hard to Win Someone”

“Dreams are not those which comes while we are sleeping, but dreams are those when u don’t sleep before fulfilling them.”

“All Birds find shelter during a rain. But Eagle avoids rain by flying above the Clouds.”

“Problems are common, but attitude
makes the difference!!!”

“suffering is the essence of success!!!”

“Thinking is the capital, Enterprise is the way, Hard Work is the solution”

Disclosure: Some of the links in this post are affiliate links. This means if you click on the link and purchase the item, we may receive an affiliate commission. All opinions are our own here and we do not accept payments for positive reviews.